The return of MCTV 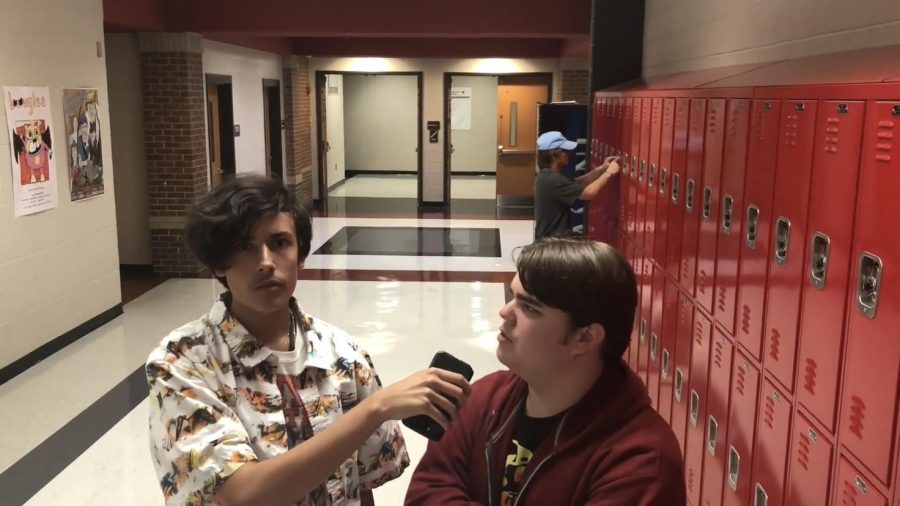 MCTV finally makes a return after its initial conceptualization in the 2019-2020 school year. Principal Dixon made a request to Mr. Orr at the end of last year to bring back the show as a better method of doing weekly announcements, along with bringing its original entertainment value to the table. It airs every Friday in the first period and generally includes announcements, information, and small skits throughout. Each bit is filmed and edited by the Audio/Video Tech III and Audio/Video Tech II students and it is all put together and has the finishing touches put on it by Mr. Orr. I recently had the pleasure to interview some of the cast and crew members and ask them about the making of MCTV. Here is what they had to say.

First, I interviewed Ty Mattox, a friend of mine and a great editor. The last skit he worked on was dubbed “Rule-Aid Man,” which, in his words, “enforces rules and protects the students.” When I asked what role he is tasked with most of the time, he said, “Acting, editing, camera, I pretty much do everything.” When asked how he feels about his roles, he added, “I feel very important in whatever I’m doing. I enjoy it a lot.” So, finally, I asked him about his vision for MCTV, and he spoke, “I want it to be funny, and also have some amount of informational value.” I personally believe Ty is most in his element when editing, but that is my personal experience with him. As for otherwise, I believe he is what most film students should aim for. A jack of all trades, having fun in every role he is assigned.

After my interview with Ty, I went to interview another important member of the MCTV filming crew, Rue Elder. I planned to ask them the same questions as I asked Ty, but the answers I was given were very unique. The last skit they were a part of was a news segment, meant to tell everyone the recent school news, while also slightly parodying other major news networks. When asked what their role is in most cases, they said, “I usually am the person who is writing the script, directing, editing, or acting.” When asked how they feel about the aforementioned role, they expressed their love for it, stating, “I love it. I love being in charge.” Now, to those inexperienced in the film field, this might sound like a bad answer. However, in film, this is extremely important. No matter the crew, they are infinitely less useful without someone in charge. Rue is the person in charge. When I asked them the final question, they had this to say about their vision: “I want it to be informational in a way that people enjoy. In a non-mundane form.” The one major similarity between this interview and the last is their visions. Both want MCTV to be informational, but also as enjoyable as they can make it for their peers.

Finally, I interviewed someone I view very highly in the film field, Christian Peña Thomas. Unfortunately, this interview had to be over text due to time limitations, but that did not change the value of his answers. The last skit he and his friend Henry Hallberg worked on was one wherein they, in his words, “make fun of content creators that go in public with only a phone and a cameraman to question strangers for content. It was a quick idea and execution but turned out wonderful.” This skit could be seen as the opener for the August 12th episode, and from what I can tell, all can agree on that last regard. When I questioned what role he is usually assigned to, he told me, “When it comes to production I am very regularly tasked with directing and camerawork but I adore being an actor since a majority of guys don’t know what I envision.” I then proceeded to ask how he feels in that role. He replied, “It’s always something that I’ve found interesting and honestly bossing people around isn’t the most fun but seeing it all come together in the way I want with these people who work just as hard as I do is pretty dope. Unfortunately [directing] is not something I have a true passion or love for, but I’d say I’m decent enough to enjoy.” This provides an interesting perspective as it is the opposite of what Rue stated previously, as he does not particularly enjoy being in charge, but he understands the importance of what he has to do, and finds joy in said job, even though it is not his true passion. Unique to this interview, I skipped the final question. I did not see it as necessary, as Christian was such a whimsical person to interview. Be like Christian. Do what you have to, find joy in it, and be a generally fun person.

Be sure to tune in every Friday morning to see these wonderful people I have interviewed continue to master their craft and try their best to make MCTV a truly enjoyable show for all who bear witness to it.

All The Red and Grey Picks Reader Picks Sort: Newest