The Red and Grey • February 17, 2022 • https://mchsredandgrey.com/1310/sports/mchs-marching-band-section-leader-profiles/ 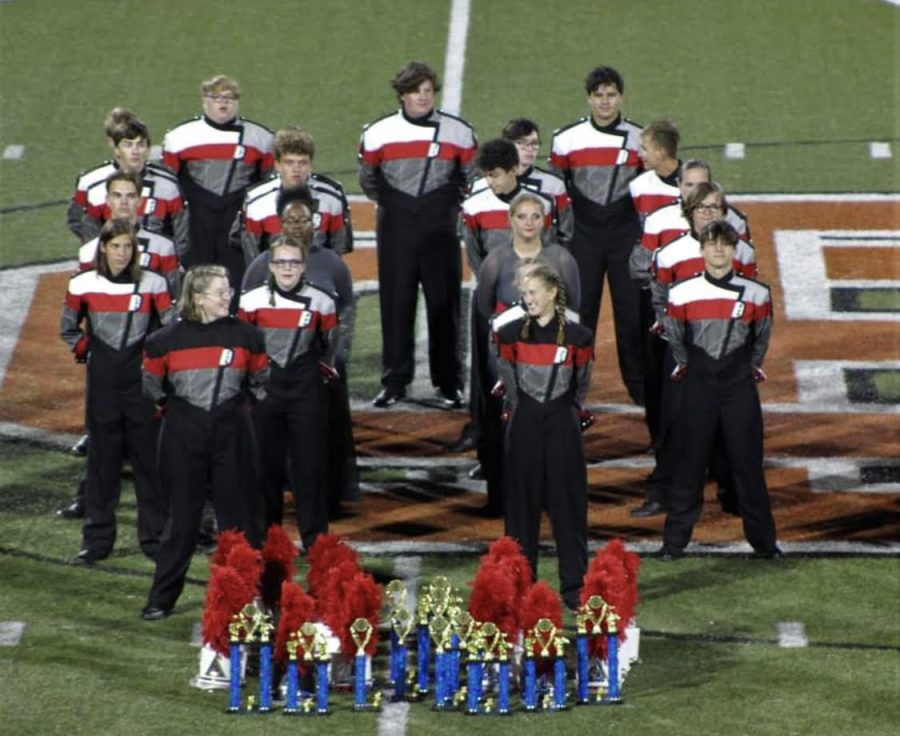 What Instrument do you play and what made you want to play it?

Emily Vaughn: “I play the clarinet. I believe it was recommended to me by my elementary school music teacher because I had a black belt in recorder and she said “Hey you should play the clarinet” I did not choose it based on that. The real reason I chose it was because my mom’s best friend was a clarinet player and I also picked up the flute because my mom’s other friend was a flute player.”

Kaleigh Dyer: “I play the clarinet. In the 5th grade, it was the only instrument I could make a decent sound on when we were trying different types of instruments, and I thought it looked cool and fun to play with as many keys as it has.”

What made you want to join marching band?

Kaleigh Dyer: “As an 8th grader all those in the band were invited to come and see what marching band was all about and get a taste of what happens both on the field and the inner workings. That experience changed my perspective on band as a whole, and made me a more passionate musician and inspired them to become better musicians and people.”

Do you enjoy being a section leader?

Emily Vaughn: “I do! It’s a lot of hard work and it can definitely be frustrating at times, but it really helps me grow as a person.”

Kaleigh Dyer: “I do enjoy being a section leader. Not only do I get to improve my own personal skill set, but I can also teach others what marching band is truly about and inspire them to become better musicians and people.”

Did you ever believe you would be a part of the band/a section leader when you were younger?

Emily Vaughn: “Absolutely not! In middle school I really doubted herself as an instrumentalist in general, but as a player I was never confident enough in myself and I honestly didn’t think I would get the position when I signed up for it.”

Kaleigh Dyer: “I had no idea I would be in marching band as a kid. I didn’t grow up with a lot of music or instrument based influence, so I would have never seen myself making music on a football field when I was younger.”

What is your favorite part about being in the band?

Emily Vaughn: “The people. That is how I made so many friends and I also enjoy the bus rides.”

Kaleigh Dyer: “My favorite part of being in the band is going to competitions. They are a really enjoyable experience and all the audience members know exactly what we are about as most of them also march. It’s also cool to see what other bands put months of work into and to bond with them over it. I also like teaching the underclassman. Most people don’t tend to like that part, but as section leader especially I’ve grown to enjoy it and also appreciate those that taught me.”

Do you think the band gets the appreciation/attention they deserve?

Emily Vaughn: “Honestly, no. I think there could be more. It’s been given more from the student section especially with our soloists they have been given more attention by the student section. But I will say we do get appreciation from parents but it’s a little different when there is a big crowd sitting in front of you and they’re just talking. It feels a little different.”

Kaleigh Dyer: “I believe that the band does not get the appreciation we deserve. Sports are often given more attention than band and students not in band are unaware of the work we do and why it’s important to us.”

Is there anything you want people to know about the show, section leaders, or the band?

Emily Vaughn: “People should come see our show. It is really cool and we all put really hard work into it exceptionally during camp because those are long weeks and it’s not fun, but it pays off and our show is really cool.”

Kaleigh Dyer: “The show this year is really special because a lot more people know Mr. Rogers and can relate to the message of our show. Not only that, but it is made to be magical and inspire those in the audience that it really is “a good feeling to know you’re alive, it’s such a happy feeling you’re growing inside.”

What is your favorite part of the show?

Emily Vaughn: “Definitely the 3rd movement and I have always said that even since I first got the music and heard the entire show. I just love the energy in it. It’s always been my favorite. And I will give props to Tripp, I love the barry solo.” “I love the dance we do during it to”

Describe to me how it feels to be a section leader.

Emily Vaughn: “Sometimes you kind of feel like a parent. It’s like you’re a reliable source of information and they come to you when they need advice or have to ask questions.” “An important thing that some people in leadership might forget is that you’re there to help people reach their potential in what they do.”

Kaleigh Dyer: “Being in leadership can be stressful, but I’ve found that it is truly worth it when it ends in our product being as good as this year and bonding with others in the band. I truly enjoy my position and I’m glad that I’ve been given the opportunity to lead the others and help us as a group, become both better as musicians and as people.”

Tripp Leffler: “It’s a neat feeling being a section leader. It can be very tough at times, but the payoff is always worth it”

Are you more nervous for competition or game days and why?

Emily Vaughn: “Probably competitions and it’s always been that way, but I do get nervous at games too because I always want to do the best that I can no matter what and my family attends every game. But it’s a little different at competitions because there are so many people who know what you’re doing and they have felt your pain. They know when something is wrong, so there’s a little more at stake.”

Kaleigh Dyer: “I’m normally more nervous on competition days because I know that there are judges watching, so I want to put on my best individual performance to help our overall scores.”

What does being a part of the band mean to you?

Emily Vaughn: “I just really enjoy being able to make a lot of friends and really just have a safe space because I get to get out of the house and be with my friends and do something I love.”

Kaleigh Dyer: “I’ve been in band for 6 years now, but it definitely means more now than day one. Being a part of band gives me pride, not only the unity I feel around other members, but knowing that the show we give can make the audience feel something. The point of music, to me, is to express the depth and diversity of human emotion, so knowing that we can share that with others and maybe even change their perspective is something that is truly unique and valuable to me.”

What responsibilities do you have as a section leader?

Emily Vaughn: “Section leaders are responsible for a few things. Really the biggest thing is that you have to be good at communication whether that be with captains, drum majors, Carson, or really just your section too. Another thing is you need to be able to look at your music and rehearse it yourself prior to the rehearsal so you can be able to help others through it and you need to be able to lead everyone through warm ups. Along with taking criticism, and taking it but giving it and giving things that are positive. On the note of positivity just anyone in leadership not just section leaders, you need to be able to stay positive because sometimes people in leadership will set the mood for the entire section which is very true and people can feed off of your mood. If you’re feeling negative then they’re going to start being negative too, so positivity is important.”

Kaleigh Dyer: “As section leader, I am responsible for things like making warm-ups, teaching my section our music, showing them how to properly march, teaching them how to read their coordinate sheet, and modifying and enhancing their techniques.”

Tripp Leffler: “As a section leader I have to refine the hard work that my section is tasked with. I’m also tasked with making sure they know the drill and music for the show.”